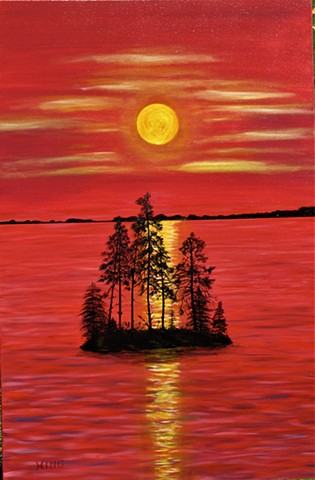 Sherry,Vince,Betty and I spent a week this September at a cottage on The Lake of Bays. The cottage was in a bay called Cockshutts Bay. The sunsets from the dock were breathtaking. I painted this from a photo of the sunset. However I also took a few pictures of a little island about a half a mile north west of Cunnington Marina about a half a mile past the west end of Bigwin island. Both photos appealed to me, so with artistic license, I just moved the island to the end of the dock in line with the sunset. Two memories for the price of one.

THERE WILL BE AN ICON IN THE UPPER RIGHT HAND CORNER TO ENLARGE THE PICTURE.